Actors Who Create Their Own Work Are Having Way More Fun! 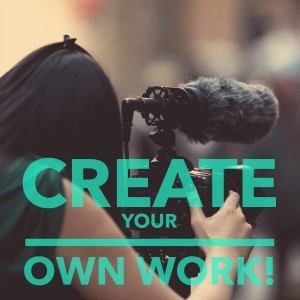 There aren’t many actors who don’t intimately understand how awful it feels to sit around and wait for the phone to ring. Or, when they do book a job, they are afraid for when the show will close or shooting will wrap because they don’t know what they will get to do next.

Personally, I hate that feeling. It makes me feel like I’m not valued in the industry – and though (on an intellectual level) I understand that I shouldn’t value myself as an artist based on how others hire me, I still hate that feeling so much that I go to great lengths to banish it from my life. My solution? Create your own work. As much of it as possible, and as often as possible.

If you’re like most actors, you have a roster of dream roles that you’ve always wanted to play. Whether it’s something like Walter White in Breaking Bad, or Blake Lively’s character in Gossip Girl, or playing Shakespeare’s Cleopatra in Antony & Cleopatra (that’s my dream role right now), you can do it yourself.

Not only CAN you do it yourself, but you SHOULD do it yourself. How many times has an actress told me that she was constantly getting called in for “young mom” until she shot a short thriller where she played a sex bomb who shot up the bad guy at the end?

The work you do will literally change the way people see you.

Begin by getting clear about where your true passion lies. If you want to be a series regular on a sitcom, it’s time to start looking for writers that have great sitcom scripts (or better yet, write one yourself).

Gather some collaborators around you – they could be classmates from acting school or a friend of a friend who’s an editor – and start talking turkey. The sooner you can actually set dates and deadlines in place, the more likely this project will come to fruition.

Your Freedom Is In Structure

I can promise that you will discover a new level of freedom. When I stopped sitting around and started creating my own work, the world of acting opened up for me. Suddenly I was playing roles that actually highlighted my abilities (as opposed to, “hot stripper.” I’m not a great stripper).

Put together a structure for yourself – Sarah will be your secret weapon for this – and stick to it. There is no limit to where you can go, so be as creative and open and honest with yourself as possible.

What projects have you been itching to create? Leave a comment in the area below to join the conversation.

Allison Volk is an actress and writer based in Los Angeles. She is the co-founder of The City Shakespeare Company in Santa Monica and runs a virtual business called The Blog Babe. Find out more about Allison by visiting www.allisonvolk.com.