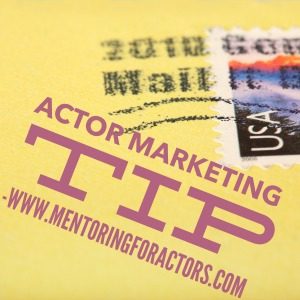 One of your jobs as an actor is to build and foster relationships, and while we often know how to network (social media, newsletters, thank you cards, etc),  the question I get asked the most from actors is, “what do I share if I don’t have a career announcement?”

I want to encourage your to treat you target list in the entertainment industry the way you want to treat your friends. Fostering relationships means there is a balance between the two people involved, a give and take. We all have a friend that loves to make most things about them, and you might feel the balance of that friendship seems off. Similarly, if you are only sharing career updates about yourself, not only does it feel inauthentic, but also imbalanced. That being said, let’s talk about what you can share in your next marketing blast.

It doesn’t always have to be about you, make it about someone else.

If you have a list of Casting Directors you keep in touch with regularly, which I hope you do, it may be time to send something out about them. For example, the 2017 Artios Award nominations came out in September, and the ceremony will take place in January 2017. It’s not to late to say congrats! They’ll feel appreciated.

In case you were wondering, the Artios Awards are specifically for recognizing excellence in casting. They started about 30 years ago and are held every year in LA and New York for Film, TV, and Theatre. “Artios” comes from the ancient Greek, meaning “perfectly fitted.” here is the list of all the 2017 nominations

Check out the nominees and see if you know anyone on the list.

What is a creative marketing outreach you did recently that you felt proud of? Share it in the comments below.